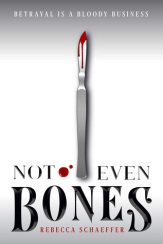 Goodreads Synopsis: Nita doesn’t murder supernatural beings and sell their body parts on the internet—her mother does that. Nita just dissects the bodies after they’ve been “acquired.” Until her mom brings home a live specimen and Nita decides she wants out; dissecting a scared teenage boy is a step too far. But when she decides to save her mother’s victim, she ends up sold in his place—because Nita herself isn’t exactly “human.” She has the ability to alter her biology, a talent that is priceless on the black market. Now on the other side of the bars, if she wants to escape, Nita must ask herself if she’s willing to become the worst kind of monster.

This book has been on my TBR for a while. Why? The description calls it a mix of Dexter and V.E. Schwab’s This Savage Song, which is a pretty epic combination when you think about it. Main character Nita has a fascination with anatomy and takes comfort in dissecting the bodies of supernaturals–like herself–which are then sold as parts on the black market by her mother. She is used to her subjects being cold on her table until one day, her mother brings a live victim to their basement and this is where the story really begins.

Fast forwarding so as to not spoil details in the story, Nita finds herself caged and up for sale on the black market. As she tries to work out who betrayed her location and her secret of being an unnatural, she attempts to escape to safe territory. In this unique world, there are all kinds of different ‘monsters,’ their various parts being of varying uses and values. This, of course, is where a lot of gore comes into play because Nita has to either cut them up, watch them being consumed or extracted or detached, and of course there is violence in the being imprisoned, escape attempts, etc.

The book leaves off on a cliffhanger after Nita comes face-to-face with…well, I can’t tell you that. Just know that this is a book that is incredibly unique and keeps you on your toes the entire time. It is certainly full of blood and guts, monsters, black market mafia, and action. I would say there isn’t a ton of character development as of yet, but book 2 is releasing September 3, 2019 so we will find out soon!

Book Soundtrack: I Come With Knives by IAMX

My name is Lindsay and I am a part-time voice teacher by day, part-time college student by night, and an avid reader in every spare moment in between. I read between 1 and 3 books each week and I am very passionate about the lost art of collecting real books. I also enjoy warm beverages (tea, coffee, and cider), thunderstorms, hammocks, folk rock, road trips, and all dogs. View all posts by singerofstories

9 thoughts on “The Sunday Review: Not Even Bones by Rebecca Schaeffer”